Yesterday, a monitoring group Raqqa is Being Slaughtered Silently published another footage of the aftermath of the U.S.-led coalition’s strikes on the city. Videos and photos show damaged buildings, bomb craters and fires.

In particular, shocking are the photos of children and adults injured because of the coalition: someone’s face is burnt, another man is bleeding while the other guy seems to be shocked and can’t move. 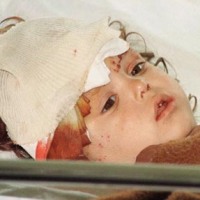