Kosovo police arrested three ethnic Albanians on charges of terrorism and recruitment. The men, said to be linked to the world’s most infamous rising jihadist group, the Islamic State in Iraq and the Levant (ISIS), are reported to have recently returned from Syria, where some 150 Kosovar Albanians are waging jihad. 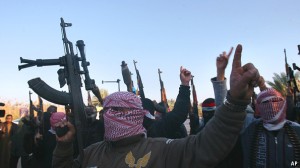 Kosovo Intelligence Agency (AKI) tracked down the men before they perpetrated any terrorism (unlike French intelligence of late); the bad news is they are said to have been plotting mass casualty suicide bombings, which would represent a dark new page in the region.

In truth, there have been warnings for some time that Kosovo has become a significant breeding ground for the global jihad. Eyes were opened back in late March, when Blerim Heta blew himself up in Baghdad, killing over fifty people. In some ways, Heta did not fit the normal profile, in that he came from an intact family that was not poor, had no criminal record, and was employed (in fact he worked at Camp Bondsteel, the main U.S. Army base in Kosovo); yet in his sudden and profound radicalization Heta did reflect a depressingly common pattern. He attended sermons by Shefqet Krasniqi, the popular imam at Prishtina’s Grand Mosque, who praised the martyrdom of the first Albanians to die in the Syrian jihad.

In advance of today’s arrests, Kosovo has been aflutter with speculation about an impending wave of terrorism brought by ISIS veterans coming home filled with hate and know-how, with multiple press reports this week warning of a rising threat. Express Online reported that ten Kosovar Albanians had been trained by ISIS to become “kamikazes” to inflict suicide bombings at home. While this report smacks of sensationalist Balkan journalism, today’s arrests indicate that it may not be wide of the mark.

In a more analytical vein, the Prishtina daily Zëri explained that the rise of ISIS constitutes a serious threat to security in Kosovo and across Southeastern Europe. Thanks to the participation of many local radicals in the Syrian and Iraq jihads, “It was a low-scale threat but now it has risen to a medium-scale threat and it is gradually growing to high-scale threat,” explained a local security expert. Moreover, it is far from clear that the AKI and the Kosovo police, which are underfunded and strained, are up to the task of blunting this rising threat; neither do the international organizations that oversee many aspects of life in this small and impoverished country seem fully cognizant of the extent of the ISIS threat either.

Fatimir Mediu, Albania’s former defense minister, explained in the Tirana dailyPanorama that the rising threat represented by Albanian jihadists returning from Syria is likely to become more acute, and young Muslims across the region are prone to recruitment thanks to widespread and seemingly intractable local concerns and troubles. Specifically, the Balkan-wide problems of dismal economics combined with very high unemployment, weak state structures, deeply embedded corruption, and persistently ugly ethno-religious politics, mean that Salafi radicalism will appeal to a certain subset of young men, particularly among the poor and disempowered. Fixing this, Mediu argued, requires taking the threat more seriously as a social and economic as well as security problem, bolstered by closer engagement with NATO and the European Union on counterterrorism matters, as well as local actions to isolate radicals before they move into terrorism.

Those are good ideas, and Kosovar authorities, the AKI particularly, are to be applauded for stopping something awful before it happened, but given the size of the threat represented by ISIS veterans coming home to Europe, combined with the region’s deep-seated socio-economic problems, it seems only a matter of time before the terrorists get it right, somewhere in the Balkans.