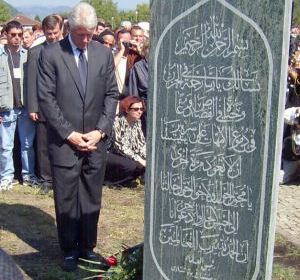 “According to the documentation of German Interpol and Austrian War on Terror Police Department, the highest representatives of Bosnia-Herzegovina [Muslim-Croat] federation Haris Silajdzic and Bakir Izetbegovic, as well as Hasan Chengic, were the key organizers of the crimes committed by the El Mujahideen unit in central Bosnia during the 1990s war,” Croat reporter Domagoj Margotic said yesterday in Belgrade, at the news conference in Tanjug’s press center.

“If Delic [recently acquitted of most severe charges by the Hague kangaroo court] was only a nominal commander, who is responsible? It is of essential importance to prove direct responsibility, of those who gave orders and are therefore guilty on the basis of command responsibility. Unfortunately, the terrorism highway went through Germany, Austrija and largely through Croatia where, in Zagreb [capital], there even was one of the training camps. This is a complex network of the international terrorism which, apart from involving the Bosnian Muslim [political] leadership, is comprised of a number of foreign services and financiers,” Domagoj said.

The expert group whose members are Professor Darko Trifunovic from Security Faculty in Belgrade, Margotic and the former President of Maglaj municipality Dzevad Galijasevic, acquired the secret documents Hague prosecutors refused to use in the indictment against the commander of mujahideens in Bosnia, Rasim Delic.

They assessed the verdict issued to Delic is scandalous.

“The evidence is there, but the main team of the chief prosecutor Carla Del Ponte, which is rather thorough and pedantic, obviously chose to ignore findings of the German Interpol,” Trifunovic said, adding that in the next few days the documents in which the names of the members of an organized terrorist network will be published on the “uncensored” web site http://www.necenzurirano.com.

Bosnian Muslim member of the expert team, Dzevad Galijasevic stressed that 400 terrorists are still living in Bosnia and Herzegovina, under the protection of Bosnian Muslim politicians.

“They are cruising freely through Sarajevo. Sarajevo government directly protects terrorists who have slaughtered hundreds of people. They were severing heads — a recognizable al-Qaeda signature, and then sending those video clips to their mentors in Iran,” Galijasevic said.

This group of anti-terrorist experts is requesting from the Hague tribunal to reevaluate the verdict issued to Rasim Delic and launch a posthumous process against Bosnian Muslim war leader Alija Izetbegovic.