Why should one read articles refuting the charge that Serbs committed mass murder in Srebrenica? 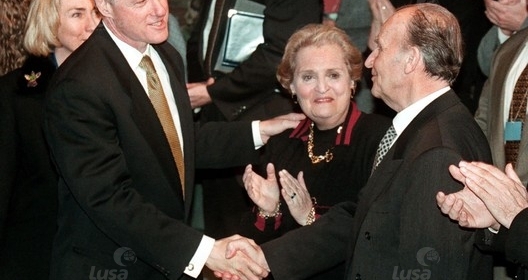 July 11 is the tenth anniversary of the recapture of the East Bosnian town of Srebrenica by Bosnian Serb troops. In coming weeks we will be sending you a number of pieces challenging the official story about Srebrenica. According to the official account, after the Serbs re-took Srebrenica, they slaughtered 8000 Muslim men.

Why should people read articles challenging this massacre story? After all, it’s consistent with what one has been told: that Srebrenica was a safe haven where the UN was supposed to protect Muslims from supposedly murderous Serbs; that the Muslims, portrayed in the media as an oppressed group, were moderate and tolerant while the Serbs were supposedly fanatical Muslim-haters with a Hitlerian vision of a mono-ethnic state; that therefore it was no surprise that when the Serbs took Srebrenica, they supposedly killed thousands of Muslims as fast as they could.

Why should you read material challenging the Srebrenica massacre story when you, dear reader, have limited time and you may have read nothing in the media that would cast doubt on any of the above?

My answer is, that is precisely why you should be skeptical about the massacre story.

Permit me to explain.

The credibility of the official massacre story depends on the credibility of media coverage of Yugoslavia in general and of what happened in Eastern Bosnia, including Srebrenica, in particular.  If that coverage has been objective, why should one entertain the possibility that the entire media has manufactured or gone along with lies about a supposed giant massacre?

How might the media objectively cover a bitter conflict like the one in Bosnia?  First, it would endeavor to fairly report what each side said, giving them equal time.  Then it would investigate claims.  For example, if each side accused the other of spreading hate propaganda, the media might publish each side’s claims and then compare those claims to samples of each side’s propaganda, both written material and what was said at rallies and in mass meetings.  If each accused the other of atrocities, the media could publish the accounts of both sides, and then do hard investigative work to see who – if anyone – was telling the truth. It would hunt for lies, because what people lie about is most revealing.

If you are like most, you have no idea what the Serbs said about what happened in and around Srebrenica from the time the Bosnian war started in the spring of 1992 until the so-called fall of Srebrenica in 1995.  No idea at all.  And therein lies the evidence that the media cannot be trusted about Srebrenica: because in fact, the Serbs said, and published, a great deal about Muslim extremist atrocities against them,but the Western media published virtually none of it. What was published by the Western media stands out for the same reason that gold stands out, because it is rare.

For the Western media to have lied for the past ten years about Srebrenica assumes that the media has been organized, by whatever means, to distort information.  It is hard – and rather awful – to believe that such a level of organization for lying could exist. But exactly the same level of organization is required in order for the entire media not to have sought out Serbian eye-witness accounts and human interest stories, to have suppressed almost all evidence of funerals of Serb victims, news reports in the Serbian media, documents and photographs distributed by the government of Serbia and by the Bosnian Serb government and army, and so on. The public is unaware of the existence of such data because the media has suppressed almost all of it. You, by the very fact that you have not seen this material, are living proof.

Let me give you an example.

In June 1993 the United Nations published a 132-page report entitled “Memorandum on War Crimes and Crimes of Genocide in Eastern Bosnia (communes of Bratunac, Skelani and Srebrenica) committed against the Serbian population from April 1992 to April 1993.” Note the dates: April 1992 was the very beginning of the war in Bosnia.  The Serbs charged that from the outset of the war the so-called Bosnian government (they say it was a government run by a faction of Muslims, the extremist faction) had a policy of genocide against Serbs.

You never heard of this document? I am not surprised.  I checked with the Lexis-Nexis media search engine. I could not find a single English-language newspaper or TV news program that reported that it existed.

The point is, in order for the public to come to any judgment about the accuracy of this UN document, it had to know the document existed and what was in it. To that end, the media of course should have reported the existence of said document and what it charged, with extensive quotations in newspapers of record such as the New York Times, and it should have seriously investigated the horrific charges.

The undeniable fact that most people, at least (but not only) in the NATO countries, are completely ignorant of what the Serbs wrote and said about Muslim extremist crimes against Serbs in Eastern Bosnia, including Srebrenica, is sufficient to make a prima facie case that media reporting concerning Eastern Bosnia, including Srebrenica, has been anti-Serb propaganda, not news.  Thus there is every reason for you to be skeptical concerning media claims about a supposed huge massacre by Serbs in Srebrenica.  By suppressing virtually everything said and written by the Serbian side in the bitter Bosnian conflict, the media has perjured itself.  Would you accept, on faith, the word of a perjured witness?

Below are links to the pdf files of the UN report so that you may read it, only 12 years late.

Memorandum on War Crimes and Crimes of Genocide in Eastern Bosnia (communes of Bratunac, Skelani and Srebrenica) committed against the Serbian population from April 1992 to April 1993.

The horror that Bosnian Serbs suffered at the hands of Muslims in the vicinity of Srebrenica is no secret. The Yugoslav State Commission for War Crimes submitted a 132 page study presenting this Serbian suffering as early as May 24, 1993 to the United Nations Security Council. Representatives of Republika Srpska (the Bosnian Serb Republic) were not allowed to submit similar documents because  Republika Srpska was not recognized by the United Nations. Yugoslavia, as a UN member state (since 1945) and one of its  founding nations, was allowed to submit this document.

The Security Council admitted the study as an official United Nations document. The document was given UN id numbers A/46/171 and S/25635 and dated 2 June 1993.

Many UN documents, crucial for understanding the civil wars in Bosnia in 1990’s, were, on American insistence, declared classified. But this document was not. Its distribution was marked “General.” Any Western journalist could have stopped by room GA57 in the basement of the U.N. Building at the corner of 46th Street and 1st Ave. in New York and gotten a copy. Or they could just called the U.N. Public Inquiry Office at (212) 963-4475 and ordered it.

If the contents of this document are false, why didn’t the Western media report it and refute it?  Its suppression eloquently proclaims its validity and the dishonesty of the media that suppressed the very news of its existence.

We present it in its entirety. More. It is scanned in original form. You can print the PDF files and you will have a photo-copy of the original.