The Syrian Arab army (SAA) backed by the allies began a large-scale offensive and the assault of the city of As-Sukhnah, a gateway to the province of Deir ez-Zor located in the eastern part of Homs province.
According to Inside Syria Media Center’ military correspondents the SAA and the allied formations captured on Thursday night the last hills to the west of the ISIS stronghold, the city of As-Sukhnah, and established complete fire control over the city.
After that, the army units advanced towards the outskirts of As-Sukhnah and began an assault of the city both from the West and from the South. Aviation provides air support inflicting massive strikes at the defense and communication of terrorists.
The biggest threat now to the Government forces is suicide bombers and improvised explosive devices. Land-mines contaminated fields and roads prevent soldiers from advancing deeper into the city.
In order to capture As-Sukhnah large number of SAA’s surge reinforcement were redeployed in Homs. A day ago it has been informed that new units are being sent to the east of Homs province from the south-western regions of Syria. 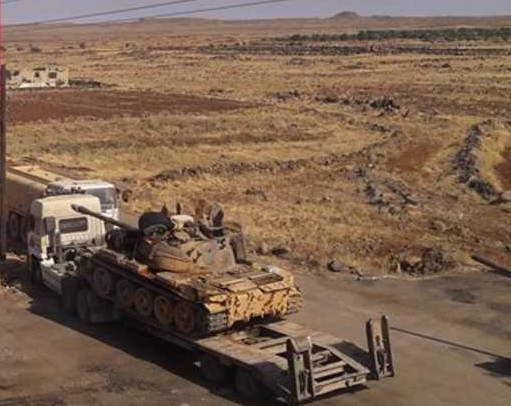 The SAA surge reinforcement was spotted in the eastern part of Palmyra and in Khamimah area.

These fresh units began to unfold for a new large-scale offensive in the direction of the T-2 airbase held by ISIS terrorists.
The forces arrived in East Homs include the elite 800th regiment of the SAA Republican Guard, the Al-Quwah Al-Jafariyah and Saraya al-Rin groups, as well as the units of 1st and 3rd Armored Divisions and elite Tiger Forces.
Almost all of these reinforcements were previously deployed in the provinces of Rif-Dimashq and As-Suwayda where they had been fighting pro-American Free Syrian Army (FSA).

Most likely, the terrorist group is in the process of withdrawing its main forces from As-Sukhnah realizing the fact that they won’t be able to confront advancing the SAA forces.
Thus, the Government forces are making every effort to advance in the direction of Deir ez-Zor – Al-Mayadin – Al-Qa’im as ISIS main forces are concentrated in these areas, not in Raqqa. It is also likely that using newly redeployed reinforcements the Syrian Government forces will attempt to block bounding As-Sukhnah with Al-Kadir in order to encircle them and prevent the militants from fleeing the strongholds of Deir ez-Zor and Al-Mayadin.