Why He wasn’t Neutered- Witness: Clinton was randomly humping female staff, they were afraid to bend over in his vicinity 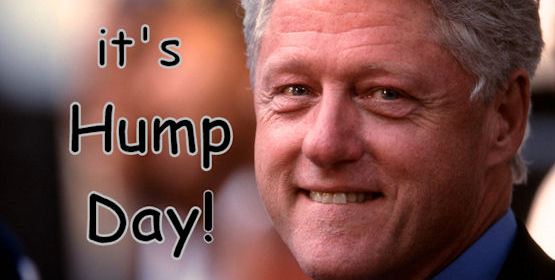 Bending over in the presence of Bill Clinton was a risky undertaking, according to former White House staffer, Linda Tripp. The staffer-turned-whistleblower said new criticism of Clinton’s outrageous behavior is “a day late, and it’s a dollar short.”

The housekeeping staff that worked during Clinton’s tenure in the White House were “afraid to bend over in his presence,” Tripp told the Weekly Standard in a recent interview. She said that stories of Clinton’s “libidinous impulses” as governor of Arkansas were well-known even before his arrival in the White House in January 1993.

…There were people back then—Linda Tripp, for instance—who reflexively knew that when a president of the United States repeatedly summons a star-struck young White House intern to sexually service him, it is more than a private romantic dalliance. “I’m so weary of hearing that society’s mores have changed,” she says, “when I knew that this was an abuse of, essentially, a kid.”

…“The housekeeping staff was afraid to bend over in his presence,” she says. Tripp’s discomfort must have been obvious, as in August 1994 she was transferred to the public affairs office of the Pentagon.

…While still working at the White House, she had once seen a woman, Kathleen Willey, leaving the Oval Office flustered and slightly disheveled—Willey later told Tripp that Clinton had groped her. “He is a predator, by pattern,” Tripp says today.

…The strategy changed. The Lewinsky relationship was next a consensual affair between adults and a matter properly resolved within the privacy of the Clinton marriage.

“It was neither of those things,” Tripp says. “It was not consensual, and it was not an affair. It was a servicing agreement on his part. She was a kid. She may have been 22 and had a voluptuous body and was misguided in her choices, but emotionally, she was 15—a groupie. It reminded me of myself with the Beatles and the Dave Clark Five in the early ’60s. That same obsession. To say that Monica Lewinsky was a woman at that point in her life was a stretch beyond comprehension.”

…Tripp remembers being stunned by the vilification directed at herself. She received death threats at the height of the scandal, prompting a move to a safe house. Her character was assassinated over and over, as was her appearance…

The former White House employee was a central figure in exposing Clinton’s extramarital affair with Monica Lewinsky, then a 22-year-old White House intern. Tripp secretly recorded Lewinsky describing her relationship with the president – evidence that helped lead to Clinton’s impeachment in 1999. Clinton was acquitted of all charges and completed his term.

Since exposing Clinton’s misconduct, Tripp has lived a quiet life in Northern Virginia, avoiding the limelight and publicity she received in the late 1990s. But Tripp says the recent spate of headlines about sexual assault and misconduct by powerful men has forced her to relive her trying experience.

Commenting on how the press has become more critical of Clinton’s behavior over the years, Tripp told the Weekly Standard that she wasn’t impressed.

“They have nothing to lose, and this is now permissible,” she said. “The fact that the Clintons are dead in the water gives [the media] tacit approval to act like human beings… It’s disingenuous. It’s a dollar late, and it’s a dollar short,” she added.

Tripp is hardly alone in accusing Bill Clinton of sexual misconduct. Since entering politics in Arkansas in the 1980s, the former president has been dogged by allegations of sexual assault, harassment, and even rape.

Between 2001 and 2003, while Hillary was serving as a US senator, Bill took a number of “extended junkets” on Epstein’s plane, which reportedly had a bed in which passengers had group sex with girls as young as 12.

Last year, an email that was apparently written by former secretary of state Colin Powell was released by hackers, claiming that Bill Clinton was “still dicking bimbos at home (according to the NYP).”