The president of the regional “Serbian association” Miodrag Linta in the strongest terms condemned, earlier today, the Croatian government Commission’ regulation, which will allow for the public use of the symbols introduced by the previous totalitarian (Croatian) regimes- The government document allows that “Ustasha” (Croatian Nazi brand from WWII) salute “Za dom spremni” (equivalent to Hitler’ “Seig Heil”) can be used publicly “in some situations”.

“It is scandalous that this regulation is Okayed by the Croatian prime minister Andrej Plenkovic. Under the same Ustasha Nazi salute “Za dom spremni“, in the notorious WWII Croatian Independent State (NDH) hundreds of thousands of Serbs, Jews and Roma people were slaughtered. By introducing this document, all these victims are being murdered once again, and the feelings of their relatives, rare Holocaust survivors, and their descendants are being hurt here on the purpose.”, Mr. Linta states in his written complaint.

From Wikipedia, the free encyclopedia- 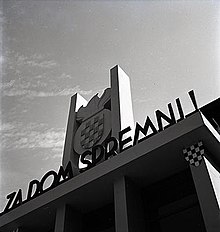 Entrance to “Zagrebački zbor” in 1942, it served as a transit camp during the existence of NDH[1]

Za dom spremni! (lit. “For home (land) – ready!”) was a salute used during World War II by the Ustaše movement. It was the Ustaše equivalent of the fascist or Nazi salute “Sieg heil”.[2][3]

…The salute was used in Croatia and Bosnia and Herzegovina during the Croatian War of Independence and Bosnian War. In November 2016 in Jasenovac a plaque commemorating members of Croatian Defence Forces killed in action 1991-2 was unveiled, containing CDF emblem with the salute “Za dom spremni”.[31] This caused an outrage as Jasenovac is the site of the biggest Ustaše-led concentration camp… The salute is not explicitly banned by law in Croatia… (https://en.wikipedia.org/wiki/Za_dom_spremni)

He added- now is very obvious that Croatian government is sending a clear message that everyone (Croatian nationalists) can seek the government permission to publicly use the Nazi (Ustasha) “Seig Heil” salute, which will then allow for the legitimate return of of the “HOS” (Croatian Nazi paramilitary from the civil wars in 90ies) memorial (which was previously removed) with the engraved words: “Za dom spremni” (Croatian equivalent to Hitler’ Seig Heil), to the Croatian WWII concentration camp “Jasenovac” (where around 700,000 Serbs and Jews were butchered), or at least to permanently legitimize its public display in city of Novska.

Miodrag Linta, The president of regional Serbian Association in Croatia

Mr. Linta is highlighting that Croatian government, by introducing this law, is grossly violating own Constitution and the basic foundation of the modern civilization: Anti-Fascism.

“In the light of this Croatian precedent, we can ask one simple question- Would be possible for the German government to accept (and legalize) the recommendation of some (government) commission, which would then allow for the public use of the Nazi salute “Seig Heil“? Of course, that wouldn’t be possible in today democratic Germany, which had denounced own Nazi past in the strongest possible terms”, underlined Mr. Linta.