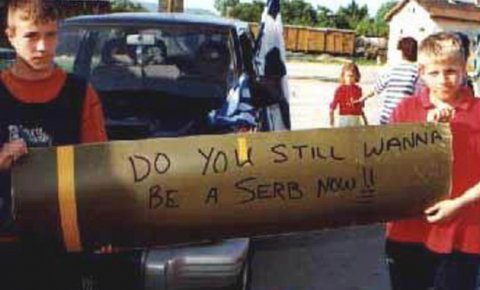 …These war crimes and crimes against humanity were part of NATO daily routine for almost three months- from March 24 until June 10th 1999, presenting the most savage bombing, of one small country by invading powers, since WWII. This war was instigated by USG, under Bill Clinton administration, and was waged under the false pretext (when former CIA operative and US ambassador William Walker staged the fake massacre in the Albanian village of Racak), after Serbia was given in  Rambouillet, France (by NATO) ultimatum, similar to Austrian-Hungarian ultimatum in the eve of WWI, requiring from Serbia to surrender its sovereignty. Both historical ultimatums were intentionally designed to be completely unacceptable for Serbia, and then to be used as a formal excuse to launch the wars of aggression.

“But enough evidence now exists to prove that the so-called massacre was a hoax. People certainly died in Racak, after a confrontation between Serbian security forces and the Kosovo Liberation Army. An Associated Press camera crew was invited by the Serbs to videotape the assault on Racak, a KLA stronghold. This film showed no massacre and no bodies. But the KLA gathered up some bodies and laid them out for other journalists to see and photograph. Film of this spectacle was then shown to the world as evidence of a massacre. However, a close analysis of this film itself raised doubts. There’s no indication that the men were even shot there; there’s no significant amount of blood in the area, even though there were numerous head wounds and even a decapitation… The real story is who was behind the hoax, and who pushed the U.S. and NATO into this war. U.S. diplomat William Walker was on the scene at the time, claiming the Serbs were guilty of “a crime against humanity.” The Sunday Times of London has published the claim that Walker was working with the CIA, which was reportedly assisting the KLA. “- www.aim.org

During the illegal NATO war against Republic of Yugoslavia, NATO aircraft flew over 38,000 combat missions, striking 995 major targets during 2,300 air raids, while 1,150 NATO military planes launched 1,300 cruise missiles and dropped at least 2,900 bombs. On the top of that murderous NATO alliance dropped prohibited (under international laws) 36,000 cluster bombs- and waged against small Serbia the low level nuclear war, by dropping around 15 tons of deppleted uranium projectiles on Serbia and Montenegro (then part of R. Yugoslavia). To understand why this illegal NATO war should be considered as genocidal nuclear war, I will cite here the Serbian Academic, Prof. Dr. Ljubisa Rakic:

“Rakic has highlighted, that during NATO bombing of Republic of Serbska (in 1995) and Republic of Yugoslavia (in 1999), the amount of depleted uranium used  by NATO would be enough to construct 170 Hiroshima bombs. The most frequent diseases resulting from this low level nuclear war are thyroid dysfunctions, cancers, Gulf & Balkanian syndromes (from which have suffered not only Yugoslavian, but NATO soldiers too)” Stated Prof. Rakic during promotion of the book “Early and delayed symptoms of exposure to depleted uranium”, by Dr. Svetlana Zunic. Rakic, who was the book reviewer, highlighted that among other symptoms of this radiation exposure, more and more women have developed the anomalies of fetus during the pregnancies. He added that the uncontrolled use of the depleted uranium in Gulf wars and in the Balkans, has resulted in the global contamination.  According to this academic, the radioactive particles which were spread by the winds to the long distances, are not only causing deadly consequences in the immediate area of bombing, but in some areas thousands miles away. – Source: Serbia Today.

During the 78 day of NATO illegal “air war”, 1,002 members of Yugoslavian military and police were killed, 2,500 civilians were murdered, among them 89 children, and at least 10,000 people were wounded and mutilated. The country’ economy, industrial & traffic infrastructure was crippled, the intentional targeting of chemical factories and oil refineries resulted in the ecological disasters and massive health issues… Thousands of residential buildings, schools, hospitals, civilian bridges, passengers trains, radio and TV stations, including the Chinese embassy in Belgrade, were reduced to rubles, maiming and killing its civilian occupants- not even maternity wards in capital Belgrade were spared. Some estimates of the material damage inflicted on Serbian infrastructure and private property by NATO aggressor go up to 100 billion dollars…

…And who is Barbarian now?