EDITORIAL: The West should be selective in “what kind of Muslim (im)migrants” they are bringing in..

NOTE: The following is “the commentary discussion” I (“Me”) have engaged at RT site with other English speaking readers, regarding the newest desecration of the Christian churches in France: 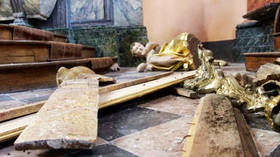 “Me- It looks like Kosovo Albanians have landed in France…

Q- Just my thought. The same M.O. as it was in Kosovo with the Orthodox churches and cemeteries: vandalized, desecrated, ruined…

R- I personally have never met a MusIim (and i have met many) that had anything against Christianity, btw i mean what i said.
On the contrary, almost every single one i met,spoke about Jesus as highly as they speak about their Mohammed.
However, i have met people who despise Christians, but never show it, they are called the Jews.

Me- P.S. If you read Quran, Suras, Hadithas and other holly Islamic books, you would find that Islam doesn’t recognize and tolerate other religions> “There is no other religion but Islam- and there is no other God by Allah” (para-phrase). And they of course recognize and respect Jesus, because they consider Him to be, not prophet of Christianity, but the Islamic prophet “equal” to Mohamed.

Me- I met many, and generally speaking majority of them are friendly, but majority (of unfriendly minority) of Sunny-Salafists who practice Wahhabism and Sharia hardly can conceal their hatred and intolerance towards Christianity and the West. But, again generally speaking even they can restrain themselves and pretend to be “Christian-lovers”, but only to the point where they remain minority in “unfamiliar social setting”, as soon they become majority, they show the real face…

R- Isn’t that the case with every religion?

Me- Not really- In the places where Muslims (especially apply to Sunni Salafist) are majority non-Muslims rapidly “disappear”, while minority Muslim groups have no problem surviving within other majorities. One of the really effective ways to “ethnically and religiously cleanse” the native population is voluntarily forming “Muslim ghettos”, which then “swallow” native population. This is very effective way of expanding their Islamic agenda. Just look at EU capitols. That was successfully used in Kosovo by Albanians towards Serbian Christians- rapidly changing demographic picture..

R- One only needs to take a glimpse at London today, that would confirm your theory, perhaps there is some measure of factuality in what you preach.

Me- When you judge Muslims in general, you should take to account that only one third of them live under (and practice) the barbaric Sharia law. So generally speaking two thirds of Muslims worldwide are OK. But again, you should take to the account that one third of them make around half billion of world population. However the problem is that most of “migrants” the West allows in are Sunni Muslims, again majority with Salafist ideology in their hearts, who try to practice and impose Sharia in “host countries”. The West should be very selective what kind of Muslims they accept in..“

THIS IS HOW KOSOVO ALBANIAN MUSLIM POPULATION ARE TREATING SERBIAN CHRISTIAN MONUMENTS- MANY OF THEM ARE UNDER “UNESCO” PROTECTION- IN TODAY NATO OCCUPIED KOSOVO. IRONICALLY MAJOR WESTERN COUNTRIES ARE AGGRESSIVELY PUSHING THAT ISLAMIC QUASI REPUBLIC KOSOVO BECOMES “UNESCO” MEMBER AND TO BE EFFECTIVELY PUT IN CHARGE FOR THE SAME CHRISTIAN MONUMENTS THEY ARE DESTROYING, EVEN AT PRESENT TIME, AS DOCUMENTED IN THIS PHOTO. NOT TO MENTION THAT ALL OF THAT HAS BEEN DONE WITH IMPUNITY BY THE KOSOVO MUSLIM ALBANIAN MOBS, UNDER “SYMPATHETIC NATO WATCH” …