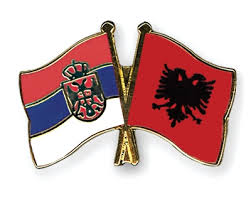 February 15–16, 1880          At secret meeting in Priština the representatives of “Malësia, Ljuma and Dibrë” and all towns of the Kosovo vilayet decided to take away by force the regions from Serbia she gained at the Congress of Berlin.

March 1881                          The Porte made the decision on armed liquidation of the Prizren League (During April the resistance in Priština, Prizren and Djakovica was militarily broken, and several months later in Debar too).

February 23–29, 1899          At the gathering in Peć the Albanian leaders formed the so-called Peć League with an aim of “defending the Albanian land” from Serbia, Montenegro, Bulgaria and Greece.

End of May, 1900                 The Porte undertook armed measures for crushing the movement of the Peć League because of suspension of Turkish rule.

November 14–22, 1908        The Congress of Albanian intellectuals was held in Bitola where the alphabet issue was discussed.

September 28, 1912              The government of Nikola Pašić made a Memorandum in which the great powers were called attention to terror and violence of the Albanians.

December 17, 1912 – January 2, 1913                 The Conference in London started working. The Albanian delegation handed over a Memorandum in which it requested that the future borders match the “maximum” demands and that Peć, Mitrovica, Priština, Skopje and Tetovo with surroundings be within Albania.

September, 1913                   Intrusion of 12,000 armed kacaks from Albania in the territory of Serbia. In the counterattack the Serbian troops reached the Adriatic Sea, but under threat of Austro-Hungary they were forced to retreat.

Middle of October, 1913       Work of the Committee for borderlines between Serbia, Montenegro and Albania started.

February, 1915                     Intrusion of Hasan Prishtina into the territory of Serbia provoked “preventive intervention” of Serbian army (conquered Elbasan, Tirana and Dürres and consolidated the positions of Esad-pasha).

November 7, 1918                The Albanian Committee for Liberation of Kosovo (so-called Kosovo Committee) was established, secret nationalistic and terrorist organization which fought for accomplishing the goals of the Prizren League (1878) and Peć League (1899).

December 1918 – February 1919      Insurrections of Albanian population in Plav and Gusinje against the new authorities.

December 17, 1919               Delegation of Kingdom of SCS at Peace Conference in Paris interceded in favor of Albania gaining independence and autonomy. In case Italy gained Vlorë and administration over Middle Albania, then “mandate” over northern Albania and ensuring of strategic borders was requested.

Middle of December, 1919    At the Congress in Skopje a Party of South Muslims (Dzemiet) was established.

September 15, – October 26, 1921   Intrusion of around 3,000 kacaks from Albania across the river Crni Drim. In the counterblow the troops of the Kingdom of SCS conquered the strategic points in Albania.

November 9, 1921                Conference of Ambassadors in Paris made the decision on recognizing Albanian independence within the frontiers from 1913.

April 21–22, 1941                Demarcation line between German and Italian occupation authorities was established. The districts of Podujevo, Vučitrn and Kosovska Mitrovica belonged to Germany. The largest part of the territory of Kosovo and Metohija (included in the territory of “Greater Albania”, to which Priština and Uroševac were later attached) went to Italy. Bulgaria got: part of the Gnjilane district, the Sitnica area, Kačanik, Vitina and Sirinićka župa (Sirinić district).

August 6, 1941                     According to Decree on Administration Regulation in the Kosovo Region the Novi Pazar, Vučitrn, Podujevo and Kosovska Mitrovica districts belonged to Serbia under German protectorate.

September 8, 1943                After capitulation of Italy the protectorate “Greater Albania” fell under German administration.

November 8, 1943                The government of Redxep Mitrovica for defense of “ethnical borders of Albania” formed the Kosovo Regiment and the 21st SS Division “Skenderbeg ”.

March, 1944                         By directive letter of Politburo to Central Committee of Communist Party of Yugoslavia the validity of the “Bujane Resolution” was essentially annulled.

December, 1944                    Massive rebellion of Albanian population in Kosovo and Metohija against new authorities and order started (rebellion crushed in February 1945).

June 23, 1946                       Official visit of Enver Hodxa to Yugoslavia. Agreements were signed on: economic cooperation, goods exchange and payment, establishment of Yugoslav-Albanian associations and agreement of credit.

November 27, 1968              Anti-Serbian and anti-Yugoslav demonstrations under motto “Kosovo-Republic” broke out in Kosovo and Metohija. Conflicts between demonstrators and police took place.

December 26, 1968               Amendments VII–XIX to the Constitution of SFRY defined the Province as constitutive element of the federation.

February 8–9, 1971              Central Committee of Communist League of Serbia concluded that Kosovo, thanks to the help of the Republic and the Federation, had the largest development rate in the country but despite this it kept lagging behind.

June 30, 1971                       Amendments XX–XLII to the Constitution of SFRY were adopted, by which the Autonomous Province of Kosovo was equalized almost in everything with the Republics.

November 20–25, 1972        The Congress in Tirana dedicated to orthography proclaimed as normative a unique Albanian literary language.

February 21, 1974                New Constitution of SFRY was proclaimed which confirmed that AP Kosovo represented “constitutive element of the Federation”. Serbia lost impact over its provinces.

November 1–8, 1981            Eighth Congress of Communist Party of Albania offered support to Albanian separatists in Kosovo and condemned severely the Yugoslav policy towards the Albanian minority.

December 20, 1983               Central Committee of Yugoslavia’s Communist League concluded that, despite of measures on fighting Albanian irredentism, the emigration of Serbs and Montenegrins under pressure was continued.

September 27, 1984              Parliament of SR Serbia requested to reduce contributions of “Serbia proper” for Kosovo, as the Republic itself was lagging behind.

June 28, 1986                       Measures against emigration of Serbs and Montenegrins from Kosovo were adopted (prohibition of selling estates and houses, stimulation of returnees).

April 24, 1987                      President of Presidency of Central Committee of Communist League of Serbia Slobodan Milošević in Kosovo Polje gave support to Serbs from Kosovo.

July 29, 1988                        Plenum of Central Committee of Communist League of Yugoslavia on Kosovo concluded that emigration of Serbs and Montenegrins under pressure did not stop.

November 17, 1988              At the meeting of the Provincial Committee of the Communist League of Kosovo Azem Vlasi and Kachusa Jashari were dismissed.

March 28, 1989                    Parliament of Serbia proclaimed Amendments to the Constitution of SR Serbia, according to which autonomy was significantly limited, right of veto to constitutional changes in Serbia deprived, legislative, administrative and legal authority of provinces narrowed.

September 7, 1990                In Kačanik, at secret meeting, the delegates of the disbanded Parliament of Kosovo of Albanian nationality passed the Constitution of “Republic of Kosovo”.

September 10, 1992              Government of SR Yugoslavia adopted the program in 14 points for solving educational and cultural issues of Albanian minority in Kosovo and Metohija.

December 10, 1993               Ministry of Foreign Affairs of SRY condemned the open invitation of president of Albania Sali Berisha to separatist forces in Kosovo to accomplish the idea of “Greater Albania”.

October 20, 1994                  In petition of the “Resistance Movement” from Kosovo, signed by Kosta Bulatović, Miroslav Šolevic, Svetomir Arsić Basara, Momčilo Trajković and others, it was asked from the leaders of Serbia to define their policy in Kosovo.

January 15, 1999                  In clash with police in the village of Račak, near Štimlje, 45 persons were killed. This event, which head of OSCE Verification Mission William Walker called “massacre of civilians”, served as cause for bombardment of Yugoslavia.

February 6, 1999                  In the palace of Rambouillet near Paris several-weeks peace negotiations on Kosovo and Metohija started, of which the failure enabled military intervention of NATO against Yugoslavia.

Excerpt from the book: The Land of the Living, V. Stojancevic, Lj.Dimic, Dj. Borozan