Cristar Karphamar was appointed as the first UN judge by the UNMIK administration led by Bernard Kouchner, and he assumed his duties in 2000.

“I was dealing with grave criminal cases in Kosovo. Quickly I realized that the Serbs did not have any chance of getting justice in the courts there. The Albanians who committed serious crimes against Serbs were being released, while many Serbs were sentenced without a fair trial,” the Swedish judge told Monday’s edition of Belgrade daily Vecernje Novosti. Full article in Serbian>>>>>

Karphamar also said that he does not believe that the Special Court for KLA (“Kosovo Liberation Army”) crimes (Specialist Kosovo Chambers) in The Hague will prosecute hundreds of those responsible for the suffering of the Serbs in Kosovo after the arrival of the international mission there in 1999 (after the war).

Personally, he added, he was not surprised when Switzerland’s Dick Marty in 2010 marked Albanian leaders Hashim Thaci and Ramush Haradinaj as leaders of criminal clans responsible for the suffering of the Serbs.

The judge said he left the province “after the shock that he experienced” while leading investigation into the bombing of a Nis Express bus in February 2001, when 12 Serbs were killed and 40 others injured. 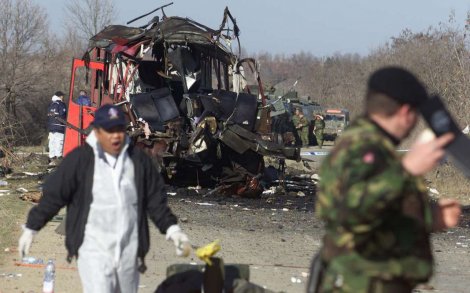 “Based on DNA evidence at the scene in Livadice, it was determined that one of the potential culprits was Florim Ejupi. I asked that he and three other former KLA members be taken to UN detention where the investigation would continue. However, they were transferred to US camp Bondsteel, into the supposedly safest place in Kosovo, from where the Ejupi escaped,” said Karphamar.

It later emerged that Ejupi had been trained by the CIA, said the Swedish judge.